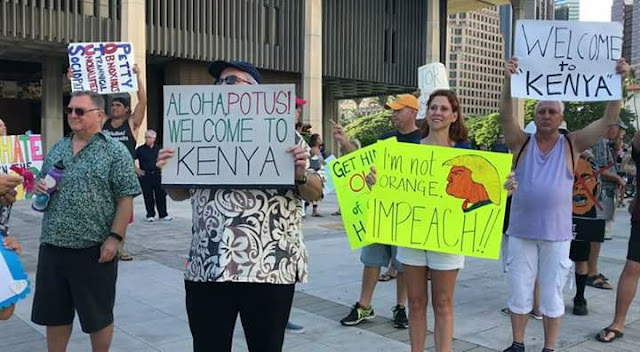 A copy of the order obtained by The Associated Press says any resistance by Malong "should be met with reasonable force."

Malong's wife, Lucy Ayak Malek, told the AP that bodyguards refused to hand over arms and the situation had worsened, with hundreds of soldiers deployed. "I think things will escalate if the president doesn't act quickly," she said by telephone.

The United Nations issued an emergency notification advising staff in the capital, Juba, to remain vigilant.

It was not immediately clear what led to the president's order, which also prevents any visitors to Malong's home. Acting army spokesman Col. Santo Domic Chol said whatever was taking place was "political."

Malong, who has been under house arrest, was fired in May and had been one of Kiir's closest allies. He was accused of directing last year's fighting in Juba that killed hundreds. A former governor of Northern Bahr el Ghazal, he also has been accused of controlling an ethnic militia that numbers in the thousands.

In February, a handful of top-level military officials resigned while accusing Kiir and Malong of ethnic bias and corruption. Shortly after his firing, Malong told the AP that he would not take up arms against the government of the East African nation, saying "we don't fight a meaningless war."

The United States in September imposed sanctions on Malong, along with two senior South Sudan officials, for undermining the country's peace, security and stability. South Sudan's civil war erupted in late 2013 and has killed tens of thousands of people and sent more than 2 million fleeing the country, creating the largest displacement of civilians in Africa since the Rwanda genocide in 1994.

Many of Malong's supporters have been advocating for his release from house arrest. Concerns have grown that the supporters will take up arms.

South Sudan's government said it was trying to "give Malong proper protection" since he can't protect himself.

"We want to ensure that criminals from the outside don't run to his house for protection and find his weapons," said the minister of cabinet affairs, Martin Elia Lomoro.