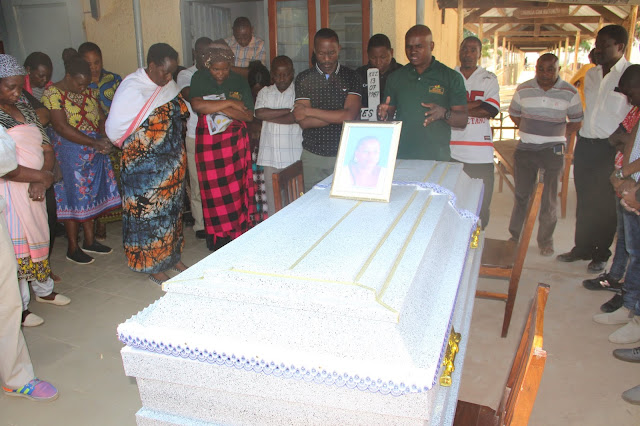 Posted by Chemi Che-Mponda at 2:31 PM No comments:

Thanks for your contributions to the Somali Diaspora as well as African Diaspora overall!  Your beautiful  blogs and short films about life in Kismayo  were/are enlightening!  Rest in peace, you are gone too soon. 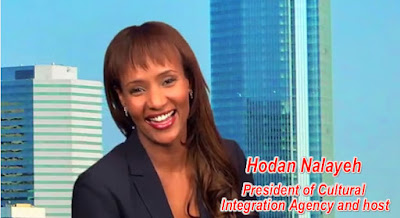 OTTAWA, Ontario (AP) - As bombings and attacks rocked the African nation of Somalia in recent years, Canadian-Somalian journalist Hodan Nalayeh found what she believed was a higher calling: Showcasing the hidden beauty of her homeland and its people.

On Twitter, she shared posts featuring marine life dangling from the hands of fishermen, a small boat setting out in cerulean waters, and locals holding leopard-spotted stingrays.

"Dried fish is big business on the island of (hash)Ilisi. They call this fish `Shabeelka Bada,' or `tiger of the ocean,"' Nalayeh wrote Thursday.

"People save all their lives to have a retirement by the beach, yet we have plenty of it and cannot see its value. Let's appreciate the beautiful blessings we have," she wrote in an earlier posting.

On Friday, the journalist dedicated to telling positive stories from a country suffering through decades of civil war, extremist attacks and famine was killed along with her husband, Farid Jama Suleiman, entrepreneur Mahad Nur and at least 23 others after a bomb exploded outside the Asasey Hotel in the Somalian city of Kismayo and gunmen stormed inside. Fifty-six other people were wounded in the attack, according to the Jubbaland regional president.

On Saturday, friends and family reeled as they heard that Nalayeh, 43, a journalist and mother expecting her third child, was among the dead.

Maaz Khan, a 24-year-old filmmaker in Toronto, said Nalayeh had shared her hard-earned wisdom when he met her a few years ago.

"She was always very inspiring," he told The Associated Press. "She would say, `It's tough in the beginning, but always push through and don't give up on your passion."'

Ahmed Hussen, Canada's Minister of Immigration, Refugees and Citizenship, mourned the journalist's death, saying on Twitter that she "highlighted the community's positive stories and contributions in Canada" through her work.

"We mourn her loss deeply, and all others killed in the (hash)KismayoAttack," he said.

Nalayeh was born in the northern Somalian city of Las Anod but moved with her parents and 11 siblings to the Canadian province of Alberta in the winter of 1984, when temperatures dropped to -40 degrees Celsius. Her father, a former Somalian diplomat, took a job as a parking attendant, she told Toronto.com in a 2014 interview.

The family relocated to Toronto in 1992, and Nalayeh later completed a Bachelor of Arts in Communications from the University of Windsor and worked in sales and business, she said.

In the podcast "Meaningful Work, Meaningful Life," Nalayeh told host Francine Beleyi that she made a mid-career pivot, going back to school to earn a postgraduate certificate in broadcast journalism and fulfill her childhood dream of being a journalist and television host. She became the world's first woman Somali media owner, according to statements she made to Canada's Status of Women committee in 2014.

"I went back to work three months after giving birth. I said "This is not for me anymore," she told Beleyi.

In 2014, she launched the Integration TV platform as a way to tell Somali stories, moving to the coastal city of Kismayo in 2018 to continue her work after visiting Somalia several times.

The platform, widely known among members of the Somali diaspora, had gained hundreds of thousands of social media followers in the last five years. It also led Nalayeh to meet Suleiman, who was recently helping to build a drinking well in the drought-stricken African country. The couple was married last November in Kenya, according to her sister.

Saciido Shaie, a Somali activist in Minnesota, said Nalayeh had wanted her two sons and younger generations of the Somalian diaspora to know about her country of birth.

"She was like, `I will take this platform and I will use it to shed a light both to Somalians in Somalia and Somalians outside," Shaie said, adding "I'm heartbroken" at her death.

Aw Hirsi, who knew Nalayeh's husband from their time together as government ministers in Jubbaland, described him as a dedicated husband.

"He was a magnificent, creative guy who deeply cared for the (average) man. He was so kind, so understanding and down to Earth," Hirsi said.

Shaie said when someone asked Nalayeh what she would like to be remembered for, the journalist said she didn't want to be "famous and all of that."

Rather, she said, Nalayeh responded: "I just want people to remember me as someone who is a unifier."

Posted by Chemi Che-Mponda at 3:30 PM No comments:

MOGADISHU, Somalia (AP) - Islamic extremists blew up the gate of a Somali hotel with a car bomb and took over the building for more than 14 hours, leaving 26 people dead before Somali forces who besieged the hotel overnight killed the attackers. The victims included a prominent Canadian-Somali journalist.

Three Kenyans, three Tanzanians, two Americans and a Briton also were among the dead, said Ahmed Madobe, the president of Jubbaland regional state which controls Kismayo. Fifty-six people, including two Chinese, were injured in the hotel attack, he told reporters.

At least four al-Shabab assailants attacked the Asasey Hotel Friday evening, beginning with a suicide car bomb at the entrance gate and followed by an assault by gunmen who stormed the hotel, which is frequented by politicians, patrons and lawmakers.

Somalia's Islamic extremist rebels, al-Shabab, claimed responsibility for the attack. Al-Shabab, which is allied to al-Qaida, often uses car bombs to infiltrate heavily fortified targets like the hotel in Kismayo, which has been relatively quiet in recent years.

The attack is a blow to the Somalia government's efforts to hold nation-wide, one-person one-vote elections next year.

Security officials cordoned off the site of the attack and prevented journalists from taking photos or video of the damaged hotel and in some cases destroyed journalists' cameras. Government officials have not been available for further interviews.

"I'm absolutely devastated by the news of the death of our dear sister Hodan Nalayeh and her husband in a terrorist attack in Somalia today. What a loss to us. Her beautiful spirit shined through her work and the way she treated people," Omar Suleiman, a Texas-based imam who knew the victim, wrote on social media.

Nalayeh was born in Somalia in 1976, but spent most of her life in Canada, first in Alberta and then in Toronto. She founded Integration TV, an international web-based video production company aimed at Somali viewers around the world. She was the first Somali woman media owner in the world.

Canadian Minister of Immigration, Refugees and Citizenship Ahmed Hussen mourned Hodan Nalayeh's death on Twitter, saying she "highlighted the community's positive stories and contributions in Canada" through her work as a journalist. "We mourn her loss deeply, and all others killed in the (hash)KismayoAttack," he wrote.

"In Ontario, Hodan launched (at)IntegrationTV to tell the beautiful stories of the Somali Diaspora, and took that same humanity and love to her reporting and storytelling in Somalia. My thoughts are with her family, and the victims of the (hash)Kismayo attack during this horrific time."

A top official of the African Union condemned the attack.

"This is an attack meant to derail progress in Somalia as the country rebuilds and consolidates the gains made on peace and security," said Francisco Madeira, special representative of the chairman of the African Union Commission. "Somalia has made tremendous progress in seizing territory and pushing out the terrorists from many places across the country."

He said the African Union's multinational force in Somalia will continue to work to stabilize the country.

Posted by Chemi Che-Mponda at 3:30 AM No comments: