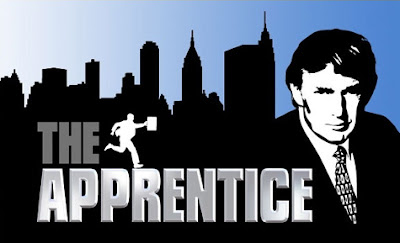 Africans ex-patriots living in the U.S. and Africans (in Africa) will compete for a luxury car plus $200,000 corporate job in Africa.

(WASHINGTON, D.C.) – A spin-off of “The Apprentice” business reality television series, made popular on NBC, with billionaire real estate businessman Donald Trump as its host, goes to Africa next season with the debut of “The Apprentice Africa.”

Auditions for the coveted competitive positions are being held Nov. 29-30, 2007, at 1425 K Street N.W., Suite 350, in Washington, D.C. from 12 noon to 5 p.m. Video auditions and online applications also will be accepted. Chosen candidates will compete for a luxury car and a corporate job in Africa that pays $200,000 annually. With its African spin-off, “The Apprentice” has now been replicated in at least 24 countries outside the U.S.

“The Apprentice Africa” is a co-production of The Executive Group (TEG), a U.S.-based business investment firm that builds consortiums between the U.S. and Africa, and Storm Vision Ltd., Nigeria’s premier television production company and producers of “Big Brother Nigeria.” TEG secured legal rights to replicate “The Apprentice” in Africa, and its subsidiary, Storm Vision will produce the 16-week reality series. Bank PHB, one of the fastest growing banks in Nigeria and an emerging icon for banking excellence, is the title sponsor of the series.

In each episode of “The Apprentice Africa,” as in the original “The Apprentice,” candidates compete in teams. The losing team is sent to the boardroom where at least one member is fired. In the African series, one of Africa’s top business moguls, Biodun Shobanjo, chairman of the Troyka group, Nigeria’s largest and most innovative marketing communications firm and co-founder of Nigeria's largest and most successful advertising agency, Insight Grey, and his associates will judge candidates.

Typically, one person is fired and sent home during each segment, although on rare occasions, 63-year-old Shobanjo, popularly known as Nigeria's “Father of Advertising,” may fire more than one candidate at a time, as did Trump.

"Many people are unaware of the burgeoning business opportunities in Africa," said Chantelle Abdul, executive producer and president of The Executive Group. “Not only is there growth and development throughout Africa, but many nations on the continent are integrating Western ‘best business practices,’ making for exciting and attractive opportunities here.

“We plan to showcase the varying and combined skills of Africans in Africa and African ex-patriots who have moved to the United States,” she continued. “It will be interesting to see how they work together in business in Africa, bridging obvious lifestyle and cultural gaps for the betterment of our beloved continent. Our show also will increase understanding of the important differences in doing business in Africa compared to other parts of the world, and overall, will be much more than ‘business as usual’."

“The Apprentice Africa” will select 18 African candidates living in the U.S., U.K. and Africa who have exceptional business acumen, personality, professional savvy and sophistication to compete in Lagos, Nigeria against their brothers and sisters living on the African continent. The series will air in 2008 Africa-wide.

“The Apprentice,” starring Donald Trump and created by Mark Burnett, the mind behind the TV reality series “Survivor”, originally showcased a 16-week job interview process through which 18 Americans competed in a series of rigorous business tasks. Many of those tasks included candidates interacting with prominent Fortune 500 company executives.

Candidates had to use their business acumen, education, creative skills and street smarts in their quest to hear Trump, the boss, utter the coveted phrase, “You’re hired,” instead of the dreaded words “You’re fired!”

Persons interested in being candidates for “The Apprentice Africa” are required to submit their resumes and detailed information online at: www.theapprenticeafrica.com. Candidates meeting the screening criteria will be contacted for individual interviews scheduled in Washington, D.C. on Thurs., Nov. 29 and Fri., Nov. 30, 2007.

For more information on “The Apprentice Africa,” please call 301.350.3437 or contact Mofolusho Agboola by email at amofolusho@gmail.com or Lola Ogungbade at ogbonlowo2001@yahoo.com.

Posted by Chemi Che-Mponda at 8:54 PM

On behalf of the Trustees and Executor of the Estate
of Late George Brumley, I wish to notify you that late
George Brumley made you one of the beneficiaries of
his estate. He left the sum of Five Million One
Hundred Thousand Dollars (USD$5,100.000.00 )to you.
This may sound strange and unbelievable to you, but it
is real and true.

Late Mr. Brumley and all his family were among the
victims that died a charter plane crash on Mount
Kenya. The flight crashed into the snow-capped,
16,355-foot Lenana Peak on Mount Kenya destroying the
entire plane and killing all passengers on board.Late
George Brumley died on the month of July 2003 at the
age of 68. You can see details of his death in the CNN
link below:


He was a widely travelled man and devoted most of his
time and wealth to charity and humanitarian work. His
great philantropist work is well known and recorded
all over the world. He must have been in contact with
you in the past or you were nominated to him in his
vision to expand his Charity work. Simply put, he was
a very dedicated sufis and Christian who loved to give
out. His great philanthropy earned him numerous awards
during his life time. In dedicating this funds to you
and other beneficiaries, he instructed that you are to
use part of the funds to promote his legacy through
activities that aim to help the old, poor, needy and
disabled in the society. Late Brumleys' legacy is the
love of charity.

Please If I reach you as I am hopeful, endeavor to get
back to me as soon as possible so we can start
processing the release of the funds to you. You are to
reply me immediately providing the following
information:

PS : For the purpose of confidentiality please contact
me through my personal email:robertfore_567@hotmail.com