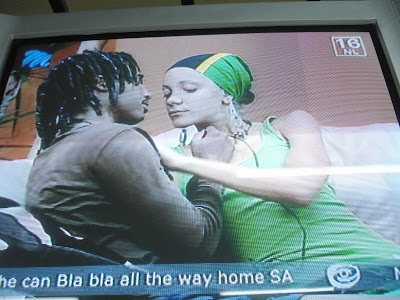 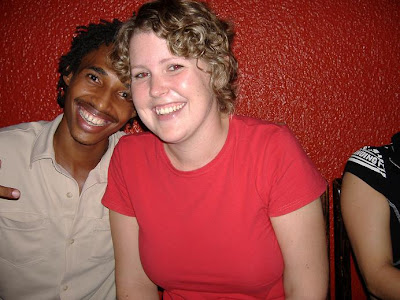 Richard’s family gangs up against Ricki

From the City Press online:

THE love triangle involving Big Brother Africa 2 (BBA2) winner ­Richard and the two women in his life, Angolan contestant Tatiana and his estranged wife Ricki, continues to unfold, a week after he won the $100 000 (R672 000) prize money.

Now Richard’s family have closed ranks and are urging Tanzania’s hottest celebrity to divorce his wife for betraying and not supporting him during his 98-day stay in the enclosure.
To add more drama to the ongoing saga, this week’s homecoming party by the sponsors to welcome the winner, which was scheduled for this weekend, has been postponed to next week.
According to the spokesperson for M-Net in Tanzania, Lucy ­Kihwele, the party was postponed to give Richard an opportunity to settle his personal life.

“He is staying in a hotel until next week. We want to give him an opportunity to talk to Ricki and see if they can make up,” said Kihwele.

In the meantime, Richard’s ­father, Vincent Bezuidenhout, and his three siblings, sister Linda and brothers Edward and Louis, are all rallying around the BBA2 winner, urging him to part ways with his ­Canadian wife, arguing that she is not good enough for the Tanzanian golden boy.

“Even our neighbours are supporting us on this one. She must go. I have made up my mind, she is not good for the family” said a defiant Vincent, who was born in Uganda 67 years ago. He has five children – three boys and two girls.

The first-born, Brenda, passed away a few years ago, and Linda, who accompanied her twin brother Louis to last Sunday’s show in Johannesburg, is married and living in America.
Another brother, Edward, is a heavyweight professional boxer, and now doubling as Richard’s ­bodyguard.

Richard’s mother died 14 years ago, making him very close to his father, Vincent.
Cornelius left Pretoria for Kanyonza in Uganda to open a ­diamond mine where he is a ­renowned businessman.

Vincent, who moved to Tanzania in the 70s, is an electrical engineer and has a farm outside Dar es ­Salaam. He says his anger against Ricki was fuelled on Sunday night when the Canadian allegedly insulted Richard as they watched him talk to BBA presenter Kabelo about his feelings for Tatiana.

“Ricki came home so that we could watch the final together,” said Vincent. “Soon after mentioning the name Tatiana, Ricki just hit the roof. She became angry and called him a pig.

“I was not happy with her calling my son a pig. I also lost it. I literally kicked her out of my house and she took a taxi. I don’t know where she went but that was the least of my worries.”
The elder Bezuidenhout said the only words he heard when Ricki was leaving was that they would meet her in court where she would ­demand half of the $100 000 winner’s cash.

“If he defies our call and reconciles with his wife, Richard will ­literally be placing a noose around his neck.
“Tanzania has lots of beautiful women whom he can marry – or even Tatiana,” he insisted.
“This woman is bad news for ­Richard,” said Linda, supporting her father. “She left for Canada, stayed there for more than two months, only to come back one week before the final.

“She wrote letters undermining my brother, calling him a womaniser. I have one of the letters and I can show it to you,” said an agitated ­Linda.

Louis said when they had asked Ricki to come with them to the ­airport to welcome Richard on Wednesday, she refused. “What type of a wife is she, who does not come to welcome her husband, you ask yourself?” said Louis.

While Richard has asked either his father or brother Louis to speak for him while he recovers from the hangover, Ricki was this week ­quoted in a Tanzanian blog saying she wanted to speak to Richard before giving interviews.

“I’m not prepared to talk to the media about anything regarding my future with Richard, myself, Tatiana or anything else,” said Ricki, whom Louis says has been to Richard’s hotel a couple of times.
KWA HABARI ZAIDI SOMENI:
http://www.dotspotter.com/news/467231_Accused_rapist_wins_Big_Brother_Africa_2
http://www.nigeriansinamerica.com/articles/2190/1/Big-Brother-Africa-2-Sex-Scandal/Page1.html
http://www.tonight.co.za/index.php?fArticleId=4107339
http://www.thefirstpost.co.uk/index.php?storyID=9497
Posted by Chemi Che-Mponda at 10:21 AM

Nadhani hukufurahishwa na vitendo vya Rich kwenye jumba kama vile ambavyo wengi hatukufurahishwa.Nadhani pia kuwa unashindwa kumshambulia Rich moja kwa moja kwa kuwa ni Mtz mwenzako na watu wengi wanamshangilia.Tofauti moja kati yangu na wengine ukiwemo wewe ni kuwa mimi sikukubaliana na utaratibu mzima wa hiyo bigBrother tangu mwanzo,,,(things like sleeping together,sharing rooms)..The moment you consider these to be ok,be ready for things like what happened to Rich.Come on guys,,puting youngsters like him for 3months with such kind of freedom!!!I could say people wanted this to happen.They could stop it just when things seemed to be heading to what happened.To me,considering his age he was victimised.People should stop blaming him,instead they should deal with the organizers.......Well He is a mTZ like me,he made mistakes(I know that),but now he is in trouble.So other Tanzanians(Like Da chemi) have to choose either to help him through this difficulty time(marriage,love affair and court thing) or use his past mistakes to completely destroy him by making big drama out of putting kidole kwenye pussy.Its crazy....You are a big girl(woman),a finger in pussy requires EMT????For once lets stop these drama and help this poor comrade instead of kuchochea mambo.
For some reason i find related articles in your blog to be stirring.The more we increase publicity on the matter the difficulty it becomes for him and family to work things out and so we become destroyers and not reconcilliators.

It was not rape’ - Ofunneka defends Richard


Ofunneka defends Richard
Big Brother Africa runner-up, Nigerian Ofunneka Molokwu, has finally spoken about what went down the night she and housemate Richard Bezuidenhout got up close and personal.

She says she was not raped and defends her supposed assailant, the eventual winner, Tanzanian Bezuidenhout.

The married Bezuidenhout, 24, sparked an outcry after he fondled, kissed and felt up the drunken Molokwu, 29, while his other love interest, the Angolan Tatiana Durao, was lying next to him.

The producers sent paramedics into the house because Molokwu and Durao were sobbing uncontrollably and vomiting after the incident.

Bezuidenhout, 24, was locked in the diary room.

Bewildered viewers across Africa and abroad called for Bezuidenhout to be charged with sexual assault.

Molokwu said: “I cannot call what happened rape. We were all pissed. We drank too much vodka on that day. I can’t blame Richard for what happened. Nobody even remembers what happened.

“I have not had time to watch the footage, but I’m sure I was not raped.”

Asked what Nigerians think about her behaviour in the Big Brother house, she apologised for the events of Saturday October 27 and said she had not yet spoken to family and friends.

“I’m sure my people are proud of me. I am going home some time next week and I can’t wait to see my family. It’s been a long time. I don’t know what they will say, but I do not regret a single thing that happened at the Big Brother house,” said the fertility clinic assistant.

Bezuidenhout won the US100 000 prize, with Molokwu placed second.

I must confess that I wasnt impressed with ofunemama initially, but I think she is a good and decent person all in all, but the incident with Richard? Was she really that drunk? Because prior to that day she had been able to hold her own in that House. I am so upset that big brother and his crew did nothing!

Ricki forgive your husband and take him to live with you in Canada.