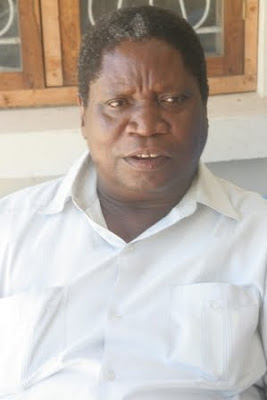 FORMER Tanzania’s Ambassador to the United States, Andrew Daraja arrived home last Sunday to find his wife, Hanna Daraja (65), stabbed to death by unknown assailants and locked into their garage in Kimara B area in Dar es Salaam.

Ambassador Daraja, who was away in Muheza, Tanga for three weeks, arrived home yesterday to find his wife dead and the houseboy gone.

The former ambassador, who has served in public office in various capacities, told the 'Daily News' today that he last contacted his wife on Saturday afternoon to inform her that he would be travelling back the next day (yesterday).

“When I tried to call again later in the evening, the call could not go through. I tried again later several times and still it didn’t go through,” he explained his eyes welling up with tears.

When he arrived at his home, his driver hooted but there was no response from inside.

“I tried calling again, and got no answer. I was then beside myself with worry, I knew something was definitely wrong. I asked my driver to climb over the fence and open the gate,” he said.

They saw her shoes and bags strewn on the ground close to the gate, propelling ambassador Daraja to rush into the house to check on his wife.

“I looked everywhere in the whole house but I couldn’t find her. My driver and I looked around the compound but did not find her either,” he explained.

Just when he was about to give up, he remembered to look inside his garage and…there she was, laying on the floor with a knife sticking out on her chest.

“We unlocked the garage which was padlocked from outside but she was already dead. We reported the matter to the police and they are investigating,” he whispered, tears streaming down his face.

Ambassador Daraja said the house-help, a young man aged between 19 and 20 years, was not in the house and has never been seen since. He refused to disclose the house-help’s name before the police complete their investigations.

Nothing of value was stolen, but the former ambassador suspects the assailants were looking for cash.

“I think the assailants were looking for cash, because they didn’t take anything of value and the bedroom was in a mess with things strewn all over,” he said.

The deceased was a teacher by profession but left teaching to join her husband when he was first posted to Germany and later to the United States as Ambassador. He explained that burial preparations will take place after the police have completed conducting a postmortem.

Ambassador Daraja began his duties as ambassador to US in July 2002. Prior to that assignment, he served as the ambassador to the Federal Republic of Germany between 1995 to June 2002.

He has also held different position in Public offices including in the State House. The deceased is survived by her husband, four children, three daughters and a son who lives in the United States. Efforts to get comments from the police force were futile as telephone calls went answered.