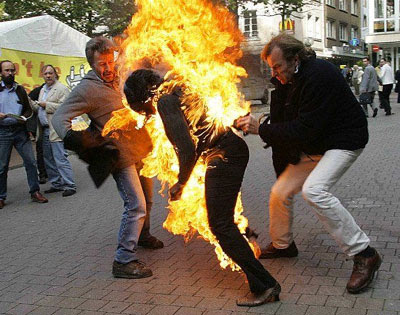 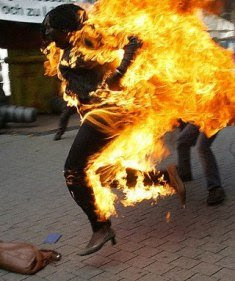 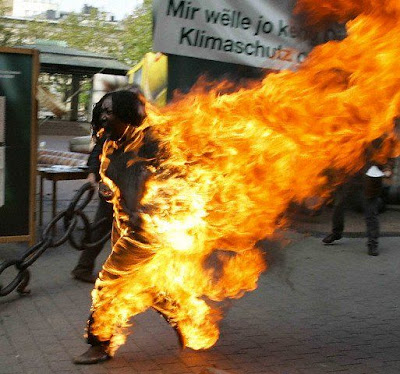 Belgians shoppers in the middle of Place d’Armes, Luxembourg City were witness to the most horrendous sight of a woman caught on fire by her own doing in protest of perceived racism against her. The 44 year old Belgian of Congolese descent is now in Bon Secours hospital in Metz fighting for her life. The Grand Duchess Maria Teresa visited her there.What could have driven this woman to take this desperate act to be heard and seen? Is it that the pain of exclusion, of racial discrimination could be more painful for her that hot fire burning her skin?
Maggie Delvaux-Mufu, a mother of three in her forties, and her husband had been facing financial difficulties, alerted several national newspapers late on Tuesday morning last week that she would be burning herself alive on place des Martyrs at 12.45 am, before setting out accompanied by her husband to walk through the centre of town to her macabre rendezvous.
The police were alerted and officers were deployed to the Rousegärtchen. But the woman changed her plan when she came across a group of journalists gathered to cover an event organized by the ‘Movement écologique’ on Place d’Armes, opposite the Cercle municipal. She soaked herself in petrol before confronting the members of the press, announcing that she was about to sacrifice her life to protest against racism. Moments later, she struck a match, turning herself into a human torch in front of hundreds of people.
The 42-year-old Belgian citizen and her husband had been facing financial difficulties. They had recently indebted themselves by buying a Citroën garage in Oberwampach, before realizing they were missing the documents that would allow them to set up a business.
Delvaux-Mufu wrote a letter to Le Jeudi recounting her story of bureaucratic difficulties and economic despair. “I’m against all forms of violence, but day after day, my family and I have to endure moral violence, discrimination, insults and much more from Mr Juncker’s administration”, she said in the letter published last week.
Posted by Chemi Che-Mponda at 10:40 AM