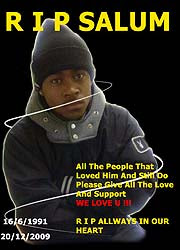 
By ANTHONY FRANCE
Crime Reporter
A TEENAGER has been knifed to death - allegedly by his best mate - after a bust-up over a message on Facebook.
Salum Kombo, 18, was stabbed repeatedly and staggered 400 yards before collapsing in a pool of blood.

He was said to have been attacked by the 15-year-old who held a grudge because he had shown "disrespect" in the posting on the social networking site.

Grieving ... weeping
girls with flowers
Friends said the pair had been "really close".

Salum - who died in a street after the attack on Sunday - was said to have been threatened after commenting on another boy's profile the day before.

The jibe is believed to have related to the alleged murderer not being invited to a party.

A girl pal said: "Salum was killed just because he posted a stupid comment on another lad's wall on Facebook.

The boy had initially written something on his wall to which Salum responded. It just escalated from there."

Salum arrived in the UK from Tanzania around seven years ago.The news was broken to his parents there yesterday.

He was living with an aunt in Bow, East London, and had been an art student at nearby Tower Hamlets College.

Another pal alleged the killer had put his arm around Salum "then just stabbed him" yards from his aunt's flat.

Tribute ... Facebook
page for Salum
Salum had been singing Christmas carols with relatives shortly before he died, neighbours said.

One, who gave her name as Norma, said: "It's heartbreaking that this has happened so close to Christmas and it has affected the whole neighbourhood.

"His aunt is in a state of total shock and devastation."

Gary Byrne, 46, cradled Salum as "the life drained out of him" after he suffered a wound to the neck and chest.

He said: "We saw the kid lying on the ground with a crowd of young boys standing around him.

When I went over there was another guy trying to stem the flow of blood. The wound was either in his neck or chest.

"I was speaking to the ambulance while holding his head and trying to talk to him, trying to keep him awake. His eyes were flickering and I could see the life draining from the poor kid. There was so much blood, I have never seen anything like it in my life.

"When the ambulance pulled up he was still alive and they worked on him for about 20 minutes but he died on the pavement."

Emma Chaingwaro, 42, a nurse, said her son was a friend of the victim.

She added: "He was a nice, very respectful guy. Apparently it was all over a text message, something minor or trivial. My son is devastated."

It was the 13th teen murder in London this year.

A 15-year-old arrested over the attack is being quizzed at an East London police station.