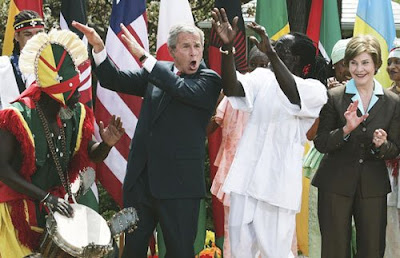 WASHINGTON (AP) — A month after returning from the Middle East, President Bush will travel to Africa in February on a five-country tour.

The president, accompanied by his wife, Laura, will visit Benin, Tanzania, Rwanda, Ghana and Liberia, the White House announced on Friday.

"This trip will be an opportunity for the president to review firsthand the significant progress since his last visit in 2003 in efforts to increase economic development and fight HIV/AIDS, malaria, and other treatable diseases, as a result of the United States robust programs in these areas," a White House statement said.

It said Bush also would talk with leaders about how the United States can help promote democratic reform, respect for human rights, free trade, open investment regimes and economic opportunity across the continent.

Bush returned Jan. 16 from an eight-day trip to Israel, the Palestinian-governed West Bank, Kuwait, Bahrain, United Arab Emirates, Saudi Arabia and Egypt. He plans at least a half dozen more trips to the Middle East, Asia, Europe and South America before leaving office next January.

Bush in November urged Congress to double U.S. money for the global fight against HIV/AIDS, to $30 billion over the next five years. In 2003 Congress approved $15 billion for the President's Emergency Plan for AIDS Relief (PEPFAR). The program is active in 120 countries, with a concentrated focus on 15, including Namibia, in sub-Saharan Africa, Asia and the Caribbean.

As of the end of September, 1.36 million people in those focus countries had received antiretroviral treatment through the program, with a focus on averting infant infections by treating pregnant women. Others receive testing and counseling.

Doubling the funding for PEPFAR would provide treatment for 2.5 million people, the White House said.
Posted by Chemi Che-Mponda at 2:13 PM