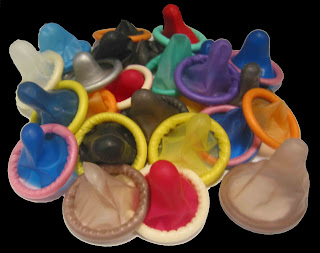 A South African court has blocked the government from buying 11 million Chinese condoms, saying they are too small, a newspaper reported Friday.
The finance ministry had awarded a contract to a firm called Siqamba Medical, which planned to buy the Phoenurse condoms from China, the Beeld newspaper said.
A rival firm, Sekunjalo Investments Corporation, turned to the High Court in Pretoria after losing the bid, arguing that their condoms were 20 percent larger than the Chinese ones.
Judge Sulet Potterill blocked the deal with Siqamba, ruling that the condoms were too small, made from the wrong material, and were not approved by the World Health Organisation, the paper said.
South Africa has more HIV infections than any country in the world, with 5.38 million of its 50 million people carrying the virus.
Posted by Chemi Che-Mponda at 10:32 AM

This must be a hoax !First of all, is there anyone on this planet that would use Chinese condoms ?? Even black Africans must have better common sense than that !! and how small are these Chinese condoms. what you are saying is that these Chinese condums fit Chinese men but are too small for black African men. I am still laughing my #$%$ off !! Don't stereotype the blacks, they said. But here we have two sterotypes exposed, and thousands of jokes being created around the world.....hey jerry, didja hear the one about the African and the Chinese condom.....? Jay Leno, we await your expertise......please let us know what countries are pleased with their shipment of Chinese condoms. Oh lord.....don't say the u.s.a.......

All men are NOT created equal!