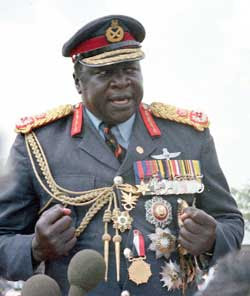 
The government of Uganda is planning to pay a compensation fee to the government of Tanzania for the help offered Uganda in the 1979 liberation war that overthrew the government of self proclaimed Uganda life President Idd Amin Dada.
The Minister of East African Affairs, Eriya Kategaya says that the two government are still in discussions over the amount of compensation.He says that was it not for the support of Tanzania troops in 1979, Uganda would still be backward and probably still under the rule of Idd Amin.
Kategaya told Parliament today that Tanzania spent a lot of money to fight Amin, lost many soldiers in the war that overthrew the government of Amin, and therefore deserve to be compensated.He says the compensation is a sign of appreciation on the part of Uganda for the help Tanzania gave to Uganda at the time of need.
Many Ugandans who had been exiled mainly in Tanzania and Kenya appealed for regional support in overthrowing Amin, considered by many as a tyrannical dictator. The Tanzania government then under President Julius Kambarage Nyerere (RIP) sent its troops who fought alongside Ugandan guerilla forces to overthrow Amin.
Posted by Chemi Che-Mponda at 11:18 AM

we should actually compensate them for overthrowing their great leader, probably the most patriotic african to have ever graced the planet earth.