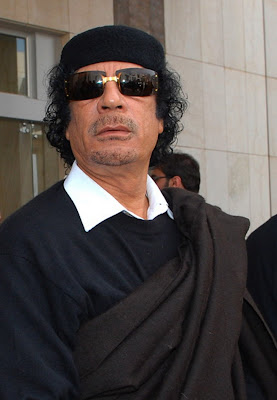 By The Citizen Correspondent
and Lipra Loof Dar es Salaam.

Libyan leader Muammar Gaddafi is in Tanzania, after fleeing his war ravaged country.The Libyan strongman sneaked out of his country yesterday, as his government crumbled with more dissenting ministers defecting, while the Western-supported rebel forces overcame units loyal to him.

Impeccable sources said that Col Gaddafi had escaped from Tripoli in a private jet that landed at the Julius Nyerere International Airport under the cover of darkness last night.He was soon whisked away and was spotted by our team in one of the five-star hotels in the city centre, where security cordon was immediately thrown.

With him were scores of close family members and aides, including a team of his familiar heavily armed, high-heeled female bodyguards. The embattled leader apparently violated the non-fly zone imposed by Nato over Libyan, and made his daring escape.

It wasn’t clear why he chose Tanzania for refuge, but sources in the government team assigned to him revealed that his second wife, Safia al-Gaddafi, was the one who had convinced them to seek refuge in the city popularly known as the Haven of Peace.

The family of the man who has ruled Libya with an iron grip for over 40 years felt they would be safer in Tanzania, ignoring an earlier offer of asylum by his former ally, Uganda President Yoweri Museveni.
However, Col Gaddafi was said to be somewhat unsure about how the Tanzanians would receive him.

“He was happy to hear that a mammoth demonstration in support of him and Libya was held last week in Dar, but he was also inquisitive over whether many still remembered that he sent troops to fight alongside Ugandan dictator Idi Amin during the 1978-79 Kagera War,” said an intelligence officer assigned to watch the hotel.

Col Gaddafi’s regime has come under attack from rebels and Western allies, who accuse him of turning guns on his own people after they revolted against his four-decade leadership in a fashion that has so far brought down two former presidents in North Africa, Mr Ben Ali of Tunisia and Egypt’s Hosni Mubarak.

Efforts to get a comment from the government over the unexpected arrival of the visitor and how long he would be staying in Dar es Salaam were fruitless by the time of filling this report.But we reliably learnt that an official announcement to this effect from State House could be made today, April 1.
Posted by Chemi Che-Mponda at 10:11 PM