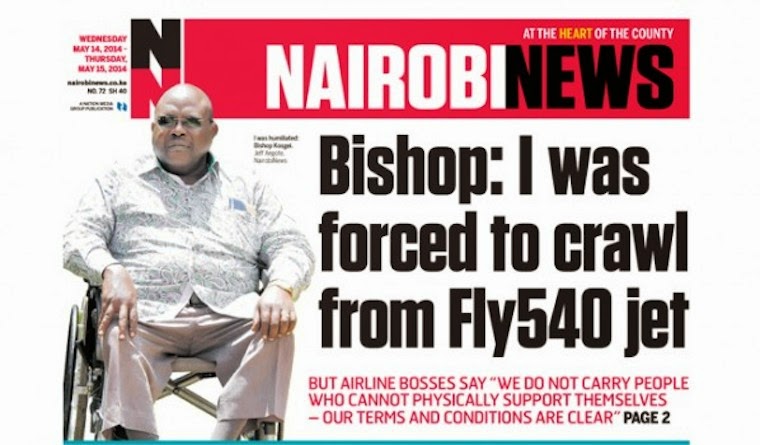 NairobiNews newspaper lead story today has disclosed how Bishop Jackson Kosgei of Worldwide Gospel Church of Kenya was forced to crawl from the plane after the airline’s staff said they could not help him get down.

According to Nairobi News, Bishop Kosgei says he was ordered to alight on his own by Fly540 attendants when it landed at JKIA from Eldoret in spite of his .

He complained about his treatment to JKIA police and OB No 18/11/5/2014 states that the airline staff refused to allow anybody to support him as he disembarked.

In the NairobiNews article,  the bishop said he was helped by the airline staff to board the plane using a lift while at Eldoret International airport.

On arriving at JKIA, he was told by the staff  that the services were not offered and was forced to crawl.

When contacted on Tuesday evening for comment before the story was published, Fly540 chief executive Don Smith said they do not carry people who cannot physically support themselves.
The local airline however, in a statement on its on Wednesday, changed tune and claimed that the bishop had refused to be assisted.

Read the full story on Nairobi News Website
Posted by Chemi Che-Mponda at 6:56 AM