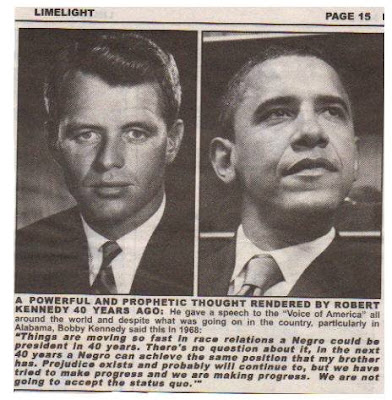 Just for common knowledge: Negro was the politically correct term for identifying black people in the 1960?s, instead of the other word, so Bobby Kennedy was being quite respectful to Black (African Americans) in that aspect when he gave this quote at that time.
But aside from that, his words were prophetic. Kennedy said this in 1968, here it is 2008? Exactly FORTY YEARS LATER!!! One of those things that make you say hmmm.
Posted by Chemi Che-Mponda at 5:39 PM