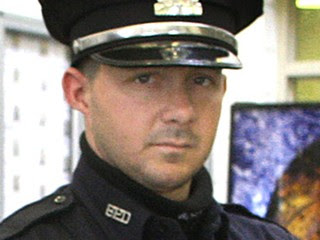 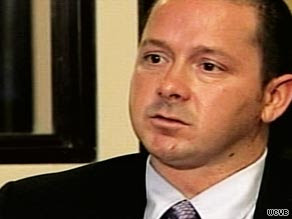 Boston police officer Justin Barrett apologizes for the e-mail he sent about the Harvard professor.

Officer Justin Barrett told a Boston television station on Wednesday night that he was sorry for the e-mail.
"I regret that I used such words," Barrett told CNN affiliate WCVB-TV. "I have so many friends of every type of culture and race you can name. I am not a racist."

Barrett was placed on administrative leave after the e-mail surfaced, and he might lose his job as a result.

Barrett, 36, who is also an active member of the National Guard, sent off a fiery e-mail to some fellow Guard members -- as well as The Boston Globe -- in which he vented about a July 22 Globe column about Gates' controversial arrest. Watch Barrett apologize »

Gates, a top African-American scholar, was arrested on July 16 and accused of disorderly conduct after police responded to a report of a possible burglary at his Cambridge home. The charge later was dropped. The incident sparked a debate about racial profiling and police procedures.

Globe columnist Yvonne Abraham supported Gates' actions, asking readers, "Would you stand for this kind of treatment, in your own home, by a police officer who by now clearly has no right to be there?"

In Barrett's e-mail, which was posted on a Boston television station's Web site, he declared that if he had "been the officer he verbally assaulted like a banana-eating jungle monkey, I would have sprayed him in the face with OC (oleoresin capsicum, or pepper spray) deserving of his belligerent non-compliance."

He also declared that he was "not a racist but I am prejudice [sic] towards people who are stupid and pretend to stand up and preach for something they say is freedom but it is merely attention because you do not get enough of it in your little fear-dwelling circle of on-the-bandwagon followers."

Barrett's comments were taken out of context, said his attorney, Peter Marano.

"Officer Barrett did not call professor Gates a jungle monkey or malign him racially," Marano said. "He said his behavior was like that of one. It was a characterization of the actions of that man." (Yaani bora angenyamaza eti hakumwitia nyani ila matendo yake tyalikua kama nyani!)

According to a statement from Boston police, Commissioner Edward Davis took action immediately on learning of Barrett's remarks, stripping the officer of his gun and badge.
Barrett is "on administrative leave, pending the outcome of a termination hearing."

CNN has been unable to reach Barrett for comment.

Racists are like cockroaches. If you see one or two of them in the light of day, there's a few thousand hiding under the baseboard.