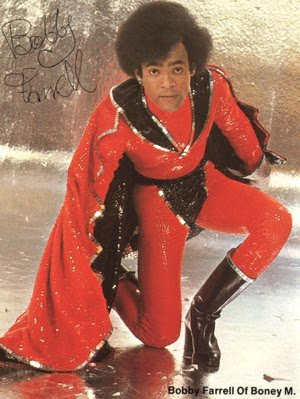 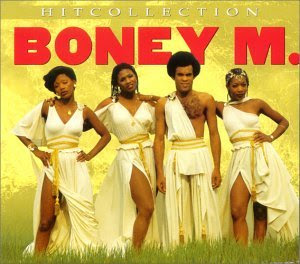 REST IN PEACE DEAR BROTHER, Your Music lives on!
"I'm Crazy like a fool! Watch out Daddy Cool!"
Bobby Farrell, frontman of the 1970s pop group Boney M, was found dead in his hotel bed in St. Petersburg on Thursday while on tour in Russia. He was 61.

Farrell was discovered by hotel staff after he failed to respond to a wakeup call. He had given a concert in St. Petersburg on Wednesday evening.

His agent, John Seine, said he had complained of breathing problems, but the cause of death has yet to be determined.

Boney M was put together by German singer and songwriter Frank Farian in 1974, and had a huge following in Europe, including the Soviet Union, in the 1970s.

Farrell, who was more a dancer and showman than a singer, was the male face of the group, which included three other West Indian session singers — Marcia Barrett, Liz Mitchell and Maizie Williams.

Farian had a hit with Baby Do You Wanna Bump? and created Boney M to support the song.

The group went on to have hits such as Daddy Cool, Sunny, By the Rivers of Babylon and a favourite in North America, Rasputin'.

Boney M had 38 top-10 hits, including 15 that hit No. 1 in Germany, where they were then based, including Brown Girl in the Ring and Mary's Boychild.

Farrell was born Alphonso Farrell on Oct. 6, 1949, in Aruba. He left home at 15 as a sailor, then worked as a DJ in Germany before being picked by Farian to front Boney M.

In 1978, Boney M was the first Western music group to perform in the Soviet Union. They sang for an audience of 2,700 Russians in Red Square after being invited by Soviet leader Leonid Brezhnev.

The original group broke up in 1986. Williams is also touring with a group referred to as Boney M.

Farrell had been performing as Bobby Farrell of Boney M with three female backup singers. He continued to perform Boney M hits, and a mixture of calypso and disco songs.

Farrell, who made his home in Amsterdam, had been scheduled to perform a New Year's Eve concert in Rome.