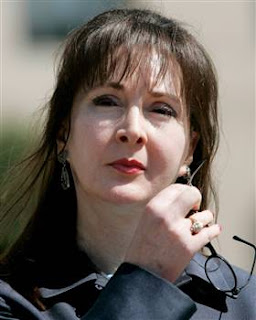 Palfrey, 52, hanged herself, police said in a news release.
The body was found by her mother, at whose home Palfrey had been staying, police said.
Suicide notes were found near the body in a small storage shed next to a mobile home, police said.
The Pinellas County Medical Examiner's Office will determine the cause of death, police said.
The county sheriff's office and the FBI are participating in the investigation.
"I am devastated to hear about this," Palfrey lawyer Montgomery Blair Sibley said. "If it turns out to be true it is a tragic loss of life."
Palfrey was convicted last month in connection with a high-end prostitution ring catering to Washington's elite.

She was found guilty April 15 of money laundering, racketeering and mail fraud and faced a maximum 55-year prison term at her sentencing, which was scheduled for July 24.
A spokesman for the U.S. Attorneys Office in Washington, which prosecuted Palfrey, declined to comment.
Prosecutors estimated she would have received a sentence between 57-71 months, about six years, because of sentencing guidelines and other factors that would have been taken into account.
At least one lawmaker, Louisiana Sen. David Vitter, a Republican, turned up in the phone records of her business, Pamela Martin & Associates.
State Department official Randall Tobias resigned in May 2007 after confirming he patronized Palfrey's business.
She argued it was a legitimate, legal escort service.
Kwa habari zaidi someni:
http://www.time.com/time/nation/article/0,8599,1736687,00.html
http://abcnews.go.com/Blotter/story?id=4765743&page=1
Posted by Chemi Che-Mponda at 4:00 PM