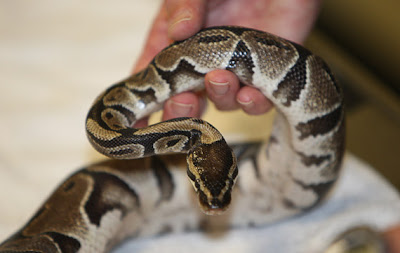 LAWRENCE, Mass., May 24 (UPI) -- A 2-foot python found nailed to a telephone pole in Lawrence, Mass., is recovering at a Boston animal hospital.
The snake was discovered Wednesday, attached to the pole by six 2-inch roofing nails, the Boston Herald reported. Investigators say it may have been there for as long as 20 hours.Brian Adams of the Massachusetts Society for the Prevention of Cruelty to Animals said the snake is still in considerable pain."
People seem to think that animals don't feel pain," he said. "They absolutely do, and snakes are no different."The snake has been nicknamed Trent by its caretakers at the Angell Memorial Animal Medical Center.
Veterinarians said none of its internal organs were damaged.The MSPCA has offered a $500 reward for information leading to the arrest of the person who nailed the snake.
Kwa habari zaidi someni:
http://www.boston.com/news/local/breaking_news/2008/05/by_globe_staff_18.html
http://www.thebostonchannel.com/mostpopular/16374014/detail.html
Posted by Chemi Che-Mponda at 5:59 AM