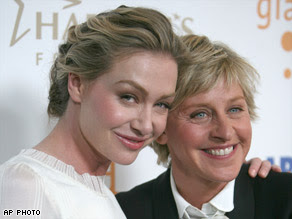 During a taping of her TV show, Ellen DeGeneres says she plans to marry her girlfriend, Portia de Rossi.

DeGeneres was taping the episode of "The Ellen DeGeneres Show" on Thursday, the day the state's high court struck down California laws against gay marriage, and it was to air Friday, a person close to the production said.
The person, who was not authorized to discuss the matter publicly, spoke to The Associated Press on the condition of anonymity.
Citing the court's ruling, DeGeneres said she and girlfriend de Rossi ("Ally McBeal," "Nip/Tuck") would be getting married.
De Rossi, 35, who was in the studio, and DeGeneres, 50, were applauded by audience members, the person close to the production said.
Posted by Chemi Che-Mponda at 11:56 AM