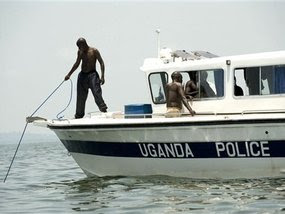 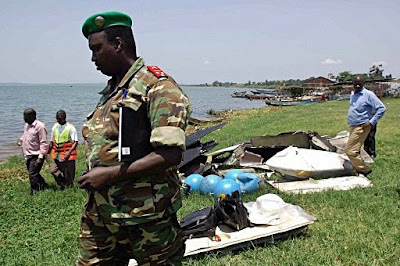 An Ilyushin cargo plane on a logistical mission to African peace forces in Somalia crashed into Lake Victoria yesterday after taking off in Uganda with 11 people on board, including three Burundian officers.

Seven of those on board were confirmed dead, and an aviation source said he feared all 11 had been killed. ``It plunged into the lake and went down deep,`` the source said.

Rescue boats and divers scoured the lake`s choppy waters for survivors some 7 km (4.3 miles) from Uganda`s main airport at Entebbe, where the plane began its flight. Two wheels and some wreckage were brought onshore.

Ugandan military sources had initially identified the aircraft as an Antonov, but the Ugandan government later said it was a chartered Ilyushin 76.

It was taking tents and water purification equipment to Somalia, where Uganda and Burundi both have soldiers in a small African Union peacekeeping mission, Ugandan officials said.

``We have not rescued anybody... Time is really working against us,`` said Information Minister Matsiko Kabakumba.
A Civil Aviation Authority spokesman said there were four crew and seven passengers on board the aircraft when it crashed.

A Burundi army spokesman confirmed three of its soldiers -- a brigadier general, a colonel and a captain -- had died.

``The information we have is that the plane crashed five minutes after taking off at Entebbe Airport. Burundi deplores the death of three of its officers who were on the plane,`` Adolphe Manirakiza told Reuters in Bujumbura.

Russian media said the pilot and copilot were Russian citizens and the navigator and flight engineer were Ukrainians.

All four were killed in the crash, Ruslan Madiyev, an official at the Russian embassy in Kampala, told RIA news agency.

Uganda said the flight also carried one Ugandan soldier, an Indian citizen, a Ugandan loadmaster and a South African peacekeeper.

Africa`s air accident rate is six times worse than the rest of the world, the International Air Transport Association says.

SOURCE: Guardian
Posted by Chemi Che-Mponda at 11:01 AM