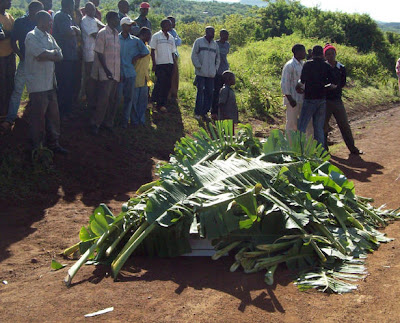 Kutoka TORONTO STAR:
TARIME, TANZANIA—It was on the side of a dirt road in northern Tanzania that relatives found a coffin containing the body of Emmanuel Magige on Tuesday morning.

The 27-year-old man was one of seven people killed and more than 12 injured on May 16 when villagers at African Barrick’s mine in northern Tanzania clashed with security forces.

Late Monday night, police stormed a mortuary in the small northern town of Tarime and removed bodies belonging to four of the dead in a bid to prevent a memorial planned at the mine for Tuesday, witnesses said.

After finding the bodies of the victims forcibly returned to their villages, families instead held small burial services at their homes in the afternoon.

“It was inhuman. They did this like animals,” said Magige’s 20-year-old wife, Mary.

African Barrick is a subsidiary of Barrick Gold Corp., which is headquartered in Toronto.

African Barrick said on Tuesday that it had no knowledge of the incident.

Barrick, which employs its own security guards as well as government police in order to guard the gold mine, has said that in the May 16 incident more than 800 “intruders” invaded the mine, where locals often come to scavenge for rocks containing gold.

Relatives of the deceased had wanted to hold a memorial service Tuesday at the mine, but say they were informed by police Monday that they would not be allowed to go ahead with the ceremony.

Families of the deceased and their supporters went to the mortuary in Tarime to guard the bodies of their loved ones because they had received information that police might try to steal the bodies.

Six trucks filled with police arrived at the mortuary at 10 p.m., according to relatives who were on the scene.

“The security officers came and asked us what we were doing there,” said Gasaya Matiku, whose 19-year-old nephew, Chacha Ngoka Chacha, was killed at the mine. “They surrounded people and started beating them. Then they took the bodies and put them on a truck.”

Witnesses said eight people were arrested by police and beaten with sticks and the butts of guns before they were taken away.

The arrested include an opposition member of the Tanzanian Parliament, a lawyer from an environmental non-government organization and a relative of one of the dead.

They were charged with criminal trespassing, unlawful assembly and obstructing a medical practitioner in the execution of duty.

Police said the accused had interfered with families’ plans to bury the victims’ bodies.

“They were just people from the opposition party who had nothing to do, so they decided to play a joke for their own benefit, trying to convince the families not to take the bodies and bury them,” said the regional police commander, Paul Ntobi.

Families of the deceased said they were angry at the treatment of their loved ones’ bodies.

“In our culture, this is a taboo. To do such a thing means that those who did it to you despised you,” said Magige Gati, Emmanuel’s father.

“I’m furious. If I could manage to get a gun, I would fight the government personally. The same police force that killed my son stole his body and dumped it.”

The government’s handling of the episode has been beyond callous, according to the families.

Gati said that when he visited the district commissioner to seek help, the official instead told him: “It was very unfortunate that they managed to kill only a few. The law is different in Tarime than in the rest of Tanzania. ”

Mary, the wife of Emmanuel Magige, said her husband got most of the family‘s income from digging for gold-laced stones at the mine.

Eight months’ pregnant with the couple’s first child, now that her husband has been killed, she doesn‘t know how she will survive.

Wilson Mangurure, a councilor for Kemambo ward said the tension arose from the investors’ failure to execute the agreements reached with five villages surrounding the mine which requires them (investors) to provide one percent of their revenue to the village authorities and allocate lands for small scale mining.