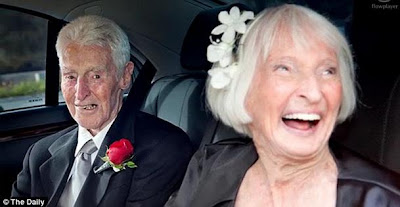 Kutoka YAHOO.COM
For some people, it's never too late for love.

That's certainly the case for Forrest Lunsway and Rose Pollard, an Orange County, Calif. couple who were married this March 19, Forrest's 100th birthday. With a combined age of 193--Rose is a spring chicken--they're believed to be the world's oldest newlyweds.

A spokesman for the Guinness Book of World Records said they had been informed of the wedding and are set to verify it as a record. For 27 years, Forrest smoked a pack of cigarettes a day, and he still drinks the odd glass of wine or whiskey and 7-Up, he said in a recent interview with the The Daily. He attributes his longevity to never having had a desk job: He spent his youth trapping animals and selling their fur in Kansas before moving to California, where he worked as a pipe welder.

You can watch a video of them here.

Both Forrest and Rose had been married before, but were single when they met back in 1983 at a senior's dance. Though they soon started dating, wedding bells seemed unlikely.

'I told him up front I had no intention of getting married," Rose said. "But then one day he asked me 'how come we never got married? and I said 'because you never asked me.'"

And being on the older side, the couple also has some wisdom to share on how to make a marriage work.Â Rose, 93, told The Daily: 'Take your time and get to know one another. Get to know if you like all the things that person stands for. ... Be forgiving and patient and say I love you once in a while."

Rose also told The Daily that their advanced age means that she and Forrest don't have many of the anxieties that can be a challenge for other newlyweds. "That's one of the things we can forget about--time. Because time doesn't mean that much."

And it's time well spent together: They both love ballroom dancing, and they want to kayak in Alaska and walk the coast of California.