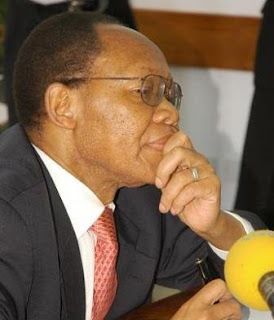 Well-placed sources have said at least seven detectives are combing Washington DC and Boston in a bid to locate the ex-governor – a central figure in the investigation, who has surprisingly not been officially questioned by authorities.

But with less than eight weeks to go before the expiry of the six-month deadline given by President Jakaya Kikwete to the EPA investigations team lead by Attorney General Johnson Mwanyika, the focus now seems to be firmly shifting onto Balali.

“There is a team of Tanzanian investigators in the US right now, apparently trying to locate Ballali. It isn’t clear if their orders are to arrest or just question him,” said a source familiar with the investigation.

“The clock is certainly ticking for the EPA probe team to wrap up its work, and there have already been suggestions that the AG (Mwanyika) will ask the president for an extension of about two months to finish the job.” The source added.

A senior government official has confirmed that the US government has offered “full cooperation with Tanzanian authorities in tracking down Ballali.”

The US government revoked Ballali’s visa shortly after he was sacked from his job as governor by President Kikwete back in January, as a direct result of the EPA scandal discovery.

This comes amidst public speculation on Ballali’s health.There are growing suggestions that the condition of the ex-governor, who has been undergoing medical treatment in the US since last year is critical.

Some are sceptical. They claim that Ballali has been deliberately edged out of Tanzania to keep him from disclosing the names of those involved in the scandal.

“Since he went to the US nobody in government is revealing what he is suffering from. I think they are deliberately keeping him out of the country to keep him from naming names.” An informed source has said.

The Mwanyika team, which says it has so far recovered about half of the $133 million embezzled from the EPA account, has also come under strong criticism for failing to make to make any arrests so far.

Critics claim that this simply confirms that there is a cover up to shield big operatives from prosecution.

Mr Ballali is believed to have been one of the key architects in the scandal. Apart from authorising the dubious payments as central bank governor, he is also understood to have gone out of his way to get rid of the bank’s former external auditors Delloit & Touche of South Africa, after they uncovered suspicious payments from the EPA accounts in 2005/06 audit.
Posted by Chemi Che-Mponda at 9:25 PM