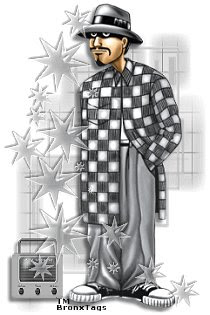 With black folks, everything starts late! Everything ends late. Time is just a thang! Black folks' philosophy about time is, 'We may not be on time, but we are in time, and we don't want to miss anything.' Black folks arrive late for weddings, funerals, and Sunday church services! And then act like they are on time!

Black folks will go to social functions, particularly at church, and not stay for the program, but want to wrap up some food to take home as if the event is fast food 'take out.'


When some black preachers can't think of what else to say during a sermon, will say, 'Look at your neighbor and say, 'God loves you!'

Every black family has a preacher..

When a lead choir member can't reach a high note or has forgotten the words, the choir members will get filled with 'a holy ghost,' get happy, shout and not have to finish the song.

A black gospel choir can sing a three word song for twenty minutes. In the black church, the announcements are longer than the sermon.

Black folks cry and pass out at the funeral, but are fine and laughin' at the dinner following the interment.

The black church takes twenty minutes to take up an offering at an afternoon program and only raise $76.34! (don't forget they take an hour to count it again after church).

Black folks will ask grandparents to watch their kids while they run an errand but don't pick them up until two days later.

Don't ask black folks for the precise time. They respond, 'Almost a quarter after....' or a 'little after two.'

Black folks will eat ferociously a t the family dinner, and then have the nerve to start wrappin' stuff up in foil to take home.

Black cashiers always seem to have an attitude.

Black folks sell CDs, potato chips, nabs and sodas out the trunk of their cars after church and at the football game.

Black folks have at least one person in the family who still wears a Jheri curl.

Black folks will have the telephone company shut off their house phone, but still have a cell phone on.

Black folks put hot sauce and ketchup on everything! Black folks have at leas t one family member that 'almost' made it to the pros.

Black folks will owe you and everybody else in the neighborhood money but can buy a new car.

Black folks put thin left over bars of soap in jars or plastic containers, run scalding hot water over them to melt them down to use as dishwashing liquid or home made bubble bath.

Black folks won't throw anything away! The rationale is that you never know when you might need it.
IN SPITE OF ALL OF OUR PECULIAR WAYS , I STILL LOVE BLACK FOLKS! DON'T YOU??YOU'D BETTER CUZ YOU IS ONE!
Posted by Chemi Che-Mponda at 11:47 AM