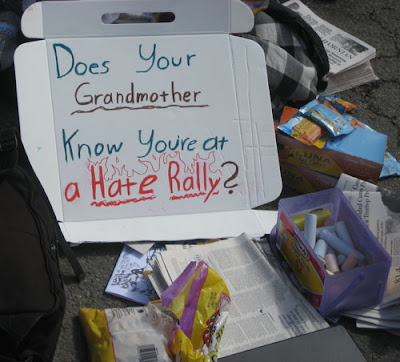 -McCain-Palin supporters increasing their attacks on Obama during rallies
-Some supporters have yelled out "treason," "kill him" and "terrorist"
-McCain and Palin have not asked their supporters to calm their attack
- Obama says Friday: Anger and division are "not what we need right now"

An angry supporter confronts Sen. John McCain at a rally in Wisconsin on Thursday.

1 of 2 "When you have an Obama, [House Speaker Nancy] Pelosi and the rest of the hooligans up there going to run this country, we have got to have our head examined. It's time that you two are representing us, and we are mad. So, go get them," one man told Sen. John McCain at a town hall meeting in Waukesha, Wisconsin.

It's almost a cry for help, with the GOP party faithful amazed McCain could possibly be losing.

"And we're all wondering why that Obama is where he's at, how he got here. I mean, everybody in this room is stunned that we're in this position," another man said at a rally.

"I'm mad. I'm really mad. And what's going to surprise you, it's not the economy. It's the socialists taking over our country," another man said. Watch more of the anger at the rallies »

CNN contributor David Gergen said that the negative tone of these rallies are "incendiary" and could lead to violence.

"There is this free floating sort of whipping around anger that could really lead to some violence. I think we're not far from that," he told CNN's Anderson Cooper on Thursday. "I really worry when we get people -- when you get the kind of rhetoric that you're getting at these rallies now. I think it's really imperative that the candidates try to calm people down."

The McCain campaign calls Obama "too risky for America" in a new Web ad that focuses on his political relationship with Bill Ayers, a founding member of the radical Weather Underground.

"Barack Obama and domestic terrorist Bill Ayers. Friends. They've worked together for years. But Obama tries to hide it," the announcer said in the 90-second ad.

The now-defunct Weather Underground was involved in bombings in the early 1970s, including attacks on the Pentagon and the Capitol. Obama was a young child at the time of the bombings.

Obama and Ayers, now a university professor, met in 1995, when both worked with a nonprofit group trying to raise funds for a school improvement project and a charitable foundation. CNN's review of project records found nothing to suggest anything inappropriate in the volunteer projects in which the two men were involved. CNN Fact Check: Is Obama 'palling around with terrorists'?

Quoted in The New York Times, Obama called Ayers "somebody who engaged in detestable acts 40 years ago, when I was 8."

At a rally Tuesday in Clearwater, Florida, Sarah Palin said Obama was being "less than truthful" about his ties to Ayers. "His own top adviser said they were 'certainly friendly.' ... I am just so fearful that this is not a man who sees America the way that you and I see America -- as the greatest source for good in this world," she said.

Palin told the crowd that she sees "a pattern in how our opponent has talked about one of his most troubling associations." Watch more of Palin's comments »

One member of the Palin audience in Jacksonville, Florida, Tuesday shouted out "treason." And at another rally in the state Monday, Palin's mention of the Obama-Ayers tie caused one member to yell out: "kill him" -- though it was unclear if it was targeted at Obama or Ayers.

At several recent rallies, Palin has stirred up crowds by mentioning the "liberal media." Routinely, there are boos at every mention of The New York Times and the "mainstream media," both of which are staples of Palin's stump speech.

Some audience members are openly hostile to members of the traveling press covering Palin; one crowd member hurled a racial epithet at an African-American member of the press in Clearwater, Florida, on Monday.

And at a McCain rally in New Mexico on Monday, one supporter yelled out "terrorist" when McCain asked, "Who is the real Barack Obama?" McCain didn't respond.

So far, neither Palin nor McCain have explicitly called on their supporters to tamper down the attacks. Watch as McCain ramps up his criticism of Obama »

On Friday, Obama touched on the rage found at recent McCain-Palin rallies, saying the "barrage of nasty insinuations and attacks" were a result of the Republican nominees failed economic ideas.

"They can run misleading ads, they can pursue the politics of anything goes. It will not work. Not this time. I think that folks are looking for something different this time. It's easy to rile up a crowd, nothing's easier than riling up a crowd by stoking anger and division. But that's not what we need right now in the United States. The times are too serious," Obama said at a rally in Chillicothe, Ohio.

But some anger found at McCain-Palin rallies is, however, directed at McCain. Watch analysts weigh in on the recent attacks »

McCain, however, seems torn. On one hand, he is going negative on the Ayers controversy.

"The point is, Sen. Obama said he was just a guy in the neighborhood. We know that's not true," he said at the rally in Wisconsin. "We need to know the full extent of the relationship because of whether Sen. Obama is telling the truth to the American people or not."

On the other hand, McCain is trying to focus on the economic downturn plaguing the country.

"But I also, my friends, want to address the greatest financial challenge of our lifetime with a positive plan for action," he added.

Also, the McCains said months ago they didn't want their son Jimmy -- a Marine serving in Iraq -- dragged into the campaign.

But on Thursday, Cindy McCain brought up her son.

She criticized the Illinois senator for voting against a bill to fund troops in Iraq, a regular line of attack from her husband's campaign.

"The day that Sen. Obama cast a vote not to fund my son when he was serving sent a cold chill through my body, let me tell you," she told a Pennsylvania crowd before introducing her husband and his No. 2.

The vote Cindy McCain is referencing came in May 2007, when Obama was one of 14 senators who voted against a war-spending plan that would have provided emergency funds for American troops overseas.

Before we in the US make a choice we may regret for the next four years, the accusations against Barack Obama should be carefully considered, as they are here.