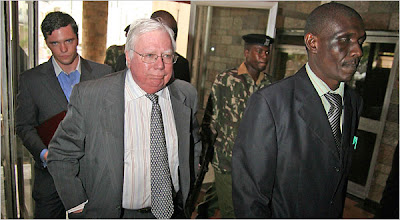 Jerome R. Corsi, the conservative author of "The Obama Nation," followed an immigration department officer holding his passport after being detained on Tuesday because he was trying to work in Kenya without a valid work permit.

NAIROBI, Kenya — The American author of a best-selling book highly critical of Senator Barack Obama was detained by Kenyan immigration agents on Tuesday as he prepared to give a press conference in Nairobi.

Jerome R. Corsi, the conservative gadfly who wrote “The Obama Nation,” in which he attacks the Democratic presidential candidate, was being held Tuesday because he was trying to work in Kenya without a valid work permit, according to local media reports. The reports said that Mr. Corsi would likely be deported.

Elias Njeru, a spokesman for Kenya’s immigration department, said, “His immigration forms were not in order.”

When asked if Mr. Corsi would be deported, Mr. Njeru said he did not know and that Mr. Corsi was still being investigated.

“I don’t know whether he came here to work, but his papers indicated he was a visitor. If he was going to work, he would need different papers,” he said. “When he arrived, he said he was a visitor on holiday. If he started to work, that would be the problem.”

Eric Kiraithe, Kenya’s police spokesman, said he had heard the reports of Mr. Corsi’s arrest and was pushing the immigration department to release more information.

“I’ve just sent an officer to the immigration department and I should get more on this soon,” he said.

Many Kenyans would be very sensitive about Mr. Obama, the Democratic contender in the American presidential election next month. His father was Kenyan and many people here are intensely cheering him on. His photos have been plastered across the back of mini-buses and stories about the election are front page news almost every day.

However, affection for Mr. Obama is not universal, especially within the divided Kenyan government. Several government officials, including some aligned with President Mwai Kibaki, have distanced themselves from Mr. Obama, saying he is American, not Kenyan, and asking what is the big deal about his candidacy.

One explanation is Mr. Obama’s criticism of some of Kenya’s leaders as corrupt. Another is the ethnic tensions that divide Kenya and plunged the country into chaos earlier this year.

Violence erupted and fighting between Kikuyus and Luos, among others, killed more than 1,000 people, shaking Kenya in the worst strife since independence in 1963.

Mr. Corsi’s attacks on Mr. Obama are similar to those in “Unfit for Command” a book he co-authored in 2004 that helped derail Senator John Kerry’s presidential bid by questioning his record as an officer during the Vietnam War.

Mr. Corsi was preparing Tuesday morning to give a press conference about his Obama book at a big hotel in downtown Nairobi. Dozens of purple chairs and a microphone had been set up. The room was soon deserted.
Kwa habari zaidi someni:
http://www.msnbc.msn.com/id/27065133/
http://www.bdafrica.com/index.php?option=com_content&task=view&id=10489&Itemid=5854
Posted by Chemi Che-Mponda at 2:09 PM

Da Chemi umesikia haya ya Rush Limbaugh tena? It's from a couple of weeks ago, but I'd missed it mpaka jana I was watching Leno and Bill Maher was on the show and he brought this up ikabidi nije kufanya utafiti katika mtandao...
http://undercoverblackman.blogspot.com/2008/09/rush-limbaugh-says-obama-is-arab-not.html

For the love of me, nashindwa kuelewa why some people like Limaugh have radio shows

the guy is also looking for some cheap publicity, he knew this wd be news and thats what he wants!
kubwa jinga!
Subira