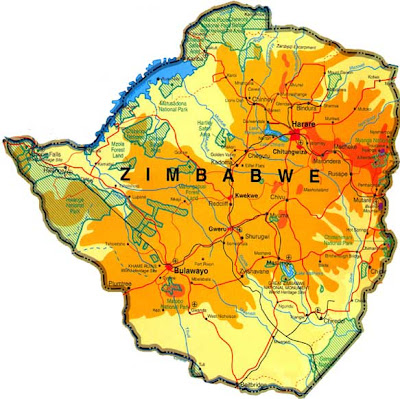 Sasa huko Zimbabwe wanafanya fujo gani tena? Wanatishia waandishi wa habari wa kutoka nchi za nje wasiandike ukweli? LOH!
**********************************************
AP: Armed paramilitary police in riot gear have surrounded a Harare, Zimbabwe, hotel housing foreign journalists.
************************************************************
Zimbabwe opposition offices raided
By ANGUS SHAW, Associated Press Writer
4-3-08
HARARE, Zimbabwe - President Robert Mugabe's government raided the offices of the main opposition movement and rounded up foreign journalists Thursday in an ominous indication that he may use intimidation and violence to keep his grip on power.
Police raided a hotel used by the opposition Movement for Democratic Change and ransacked some of the rooms. Riot police also surrounded another hotel housing foreign journalists and took away several of them, according to a man who answered the phone there.
"Mugabe has started a crackdown," Movement for Democratic Change general secretary Tendai Biti told The Associated Press. "It is quite clear he has unleashed a war."
Biti said the raid at the Meikles Hotel targeted "certain people ... including myself." Opposition leader Morgan Tsvangirai was "safe" but had canceled plans for a news conference, Biti said.
He said that Thursday's clampdown was a sign of worse to follow but that the opposition would not go into hiding.
"You can't hide away from fascism. Zimbabwe is a small country. So we are not going into hiding. We are just going to have to be extra cautious," he said.
The opposition claims it won Saturday's presidential race outright. While the election commission has issued results for the parliamentary races held alongside the presidential race, it has yet to release any presidential count.
Official results showed the opposition won the majority of seats in the 110-member parliament. But the Zimbabwe Electoral Commission said that there were "logistical problems" delaying the results for the 60-member senate.
Mugabe's Deputy Information Minister Bright Matonga said Thursday that Mugabe was ready for a runoff, dashing hopes that he would bow quietly off the national stage he has dominated for 28 years.
"President Mugabe is going to fight. He is not going anywhere. He has not lost," Matonga said on the British Broadcasting Corp. "We are going to go hard and fight and get the majority required."
The 84-year-old Mugabe was shown on state television Thursday meeting African Union election observers, his first public appearance since the elections.
Matonga accused the opposition of trying "to get rid of President Mugabe at all costs and that is what we are going to fight."
"This election campaign was not a campaign for democracy but a campaign for regime change," he said, going on to say that the opposition was sponsored by the West. He said ZANU-PF would go back and "regroup" and campaign "very vigorously in "a very peaceful manner."
International concern mounted about the continuing delays.
"We still have not seen the important thing, which is real live election results," said State Department spokesman Tom Casey. "We need to see an official tally, see it soon and have assurances made that this is actually a correct counting of the votes."
"Delays raise serious questions in our minds about what is going on in the vote counting," he said.
Former U.N. chief Kofi Annan said the continuing delays were dangerous. He urged the government and the electoral commission to scrupulously observe the electoral law and "to declare the election results faithfully and accurately."
"We live in an open world today and indeed the eyes of the world are on Zimbabwe, on its Electoral Commission, on its President. I urge them to do the right thing, to respect the Constitution and to obey the electoral laws. The election results should be released now," he said.
Mugabe has ruled since his guerrilla army helped force an end to white minority rule in then-Rhodesia and bring about an independent Zimbabwe in 1980.
He ordered the often-violent seizures of white-owned commercial farms, ostensibly to return them to the landless black majority. Instead, Mugabe replaced a white elite with a black one, giving the farms to relatives, friends and cronies who allowed cultivated fields to be taken over by weeds.
Today, a third of the population depends on imported food handouts. Another third has fled the country and 80 percent is jobless. Inflation is the highest in the world at more than 100,000 percent and people suffer crippling shortages of food, water, electricity, fuel and medicine. Life expectancy has fallen from 60 to 35 years.
Posted by Chemi Che-Mponda at 2:58 PM