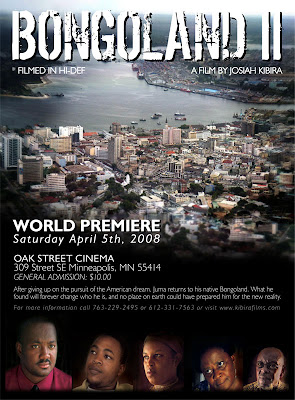 The following is a movie review written by MEGAN KADRMAS from The StarTribune - Friday April 4th - After she reviewed the movie. (Page F11)

Plymouth based filmmaker Josiah Kibira releases his third attempt Saturday in a quest to create high quality films in Swahili. "BONGOLAND II" completes an adventure that brought Kibira back to his native country of Tanzania for 36 days of filming.

As a continuation of Kibira's first Swahili-based movie "Bongoland", this sequel follows as main character Juma as he readjusts to life in Tanzania after failing in the United States.

The beauty of "Bongoland II" arises in its misleading simplicity. Although it could be said that the film tracks Juma's adaptation, it uses larger issues to highlight the ways in which Juma is not - and may never be - fully readjusted.

From family secrets to workplace drama, reconnecting with friends to waiting for his girlfriend, it becomes clear that Juma might not fully reclaim who he once was.

Tanzania serves as a complementary backdrop, with its own mixture of basic starkness and complex beauty. Inside cinder block shanties and pristine swaths of beach, Juma learns that leaving home is sometimes easier than returning home.