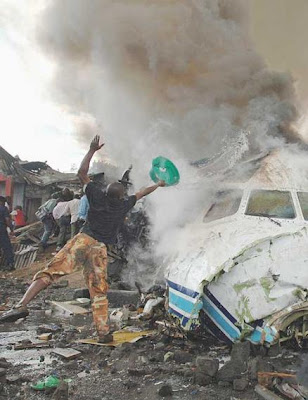 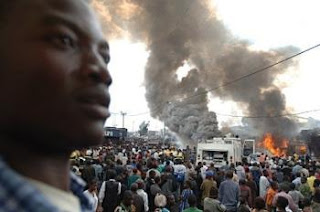 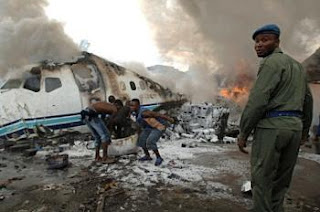 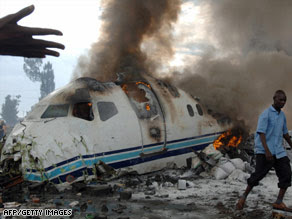 
CNN) -- A plane crashed Tuesday shortly after taking off from the Goma airport in the Democratic Republic of Congo, killing at least 75 passengers and crew members on board, a foreign ministry spokesman said.

Five of the crew and 10 passengers survived the crash, according to Antoine Ghonda, a Congolese lawmaker and former foreign minister.
A U.S. Embassy spokeswoman said two Americans were on board the plane, and it was unclear if they survived.
One engine failed as the plane was taking off, Ghonda said. He earlier had indicated the cabin may have been overloaded. He said weather was not a factor.
It's unclear exactly how many passengers were on the flight, he said. Watch as Ghonda describes what went wrong »

There also are concerns that others on the ground may have perished when the plane slammed into a marketplace in Goma's Birere neighborhood.

"This was a market area where women were selling their goods," said Anna Ridout, who works at the Goma office of World Vision, a Christian relief organization.

"People were talking of people just being plowed over by the plane moving across the ground and through the shops and through wooden houses," she said.

U.N. spokesman Kemal Saiki said the pilot and the co-pilot were among the survivors based on conversations with rescuers on the scene.

The Hewa Bora Airways DC-9 was taking off from Goma in the eastern mountains for the central city of Kisangani when it plummeted into a neighborhood near the runway, Ghonda said.


"It actually failed to take off from the runway and went straight through the commercial center here in Goma," Ridout said.

The plane went down shortly after 3 p.m. (9 a.m. ET) and was still on fire an hour later, Saiki said.

The United Nations and Red Cross are helping with the rescue effort, which is hampered by the "basic, if nonexistent" equipment in the impoverished country, Saiki said.

Speaking two hours after the crash, Ridout said, "What I can see is a whole parade of shops on fire and smoke coming out of the roofs."

She said she had spoken with a man who told her he had entered the plane's wreckage and rescued six people, including a baby.

The European Commission added Hewa Bora to its blacklist of carriers last week. The commission had banned all other Congolese carriers, but Hewa Bora operated a weekly flight to Belgium "under a special arrangement," according to a commission news release. That flight was halted last week because of safety violations, Ghonda said.

Hewa Bora Airways is a private Congolese airline based in the capital, Kinshasa.

Congolese authorities had not suspended the airline. "I'm quite sure they're going" to after this week's crash, Ghonda added.


The Democratic Republic of Congo, formerly Zaire, has a dismal aviation record. There have been 10 plane crashes there since February 2007, resulting in 76 deaths, according to the Aviation Safety Network.

Saiki said air travel is one of the few ways to get around.

"This is the third-largest country in Africa, as big as Western Europe, and yet you don't even have 2,000 miles of roads," Saiki said. "So basically most of the transportation in such a big country is done by air."