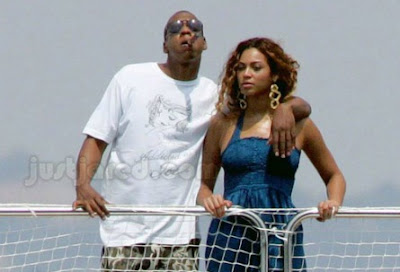 Jay-Z & Beyonce Are Husband and Wife
Superstars Jay-Z and Beyonce Knowles are now husband and wife, a close friend of the couple has revealed. The couple is alleged to have married in a private ceremony at a chapel in Scarsdale Village in Westchester, New York, on Friday afternoon, surrounded by around 30 friends and family. The all-white ceremony was attended by Knowles' mother Tina and father Mathew, and her younger sister Solange. Also in attendance were Knowles' star's former Destiny's Child bandmates, Kelly Rowland and Michelle Williams, Jay-Z's mom Gloria, and pals Chris Martin and Gwyneth Paltrow. The wedding party then moved on to the rap mogul's luxury New York penthouse apartment in the TriBeCa area of the city, where a marquee had been erected on a terrace at the building. The marquee was also decorated with five-foot tall candelabras and 60,000 elegant white orchids, which had been flown in from Thailand at a cost of $500,000. The wedding reception was reportedly attended by more than 200 guests, including producer/music mogul Jermaine Dupri and his girlfriend Janet Jackson, R&B singer Usher, rappers Wyclef Jean and Kanye West, producer Pharrell Williams, and Knowles' Dreamgirls co-stars Jennifer Hudson and Jamie Foxx. And the low-key wedding celebration was exactly what the couple had in mind. On Friday, the source told People.com, "It happened earlier this evening. Jay wanted it to be a really private affair - close friends and family." But the newlyweds, who have been dating since 2002, will not have time for a honeymoon just yet - Carter is currently in the middle of a North American tour with hip-hop/soul queen Mary J. Blige. Instead, the couple is reportedly set to celebrate their nuptials at a luxury $8,000-a-night hotel on the Caribbean island of Anguilla later this year.
Posted by Chemi Che-Mponda at 8:37 AM

Hi
Well this is a nice Blog on most important facts. I am happy to read this. I shall link from my blogs to this blog to day itself.

We are running a matrimonial website which provides you free service to find apt and suitable soul mate for you to marry. You can register your profile under suitable category for free. You can search for suitable profiles and can contact them free.

Later come and search for suitable profiles. We are going to promote this new service heavily so millions will login to the site all will see your profile free. So act now and visit the site to register now.